The Lion and the Unicorn by Ella Scandal

Home » The Lion and the Unicorn by Ella Scandal

The Lion and the Unicorn by Ella Scandal

Watching Aaron painting his corkscrew hair is one of my favourite pastimes. When we first met he’d blushed when I caught him converting a patch of grey back to his natural black. After a few months, he’d just smiled sheepishly when I commented on how good he looked with a few highlights. But now? Now my eyes are flickering around as if I’m in the middle of REM sleep, watching his deft hands fly over his locks with primary coloured chalks, powders, and glitters.

Today isn’t just our first Pride event as a couple. It’s Aaron’s first ever. We met just after last year’s, in a café on the high street. I’d just thought he was a hetero guy. A straggler from the gig that had gone on at the university. It was his band tee that had made me assume, you know? I’d been worried that he was about to start something, with the way he kept staring at me. But when he did open his mouth it was to confess that he’d spent all weekend on the periphery of our colourful celebrations, all constricted and closeted and not knowing how to get out. Even today, he’s still half in, but that’s all about to change in the hugest of ways.

See, this year’s event will be televised. My sister, Syd, had called us brave this morning when we said we weren’t put off by the idea of cameras. I’d been so fucking proud when my usually meek boyfriend looked her square in the eye and said, “You’re calling us brave for going about the every day business of living our lives? You sure you’re an ally?”

The way he’d pulled back his shoulders and lifted his chin… it was the first time I’d ever seen him look so sure of his own identity. Damn, it had made my dick so hard. And now, thinking about how ferociously we’d fucked in the kitchen when Syd left is making me hard again.

As I watch Aaron finish blending a bright purple stripe of hair with a neon pink one, he shifts his gaze. He holds my eyes but doesn’t stop. He just switches to a different brush and starts to blend in some red. When his lips quirk into a smile I know he’s noticed. At this stage I’m only wearing a thong and a multi-coloured chain chest harness, so he knows what’s what.

All it takes is a sharp move of his desk chair for me to know what he wants me to do. There’s room for me now, under the table that’s littered with pots and powders. I don’t walk to him. I crouch, fall forward and let my hands slap against the floorboards, then crawl. I prowl across the room, chest so low it’s almost skimming wood. Even though my head is pulled back I still have to look up at him through my lashes.

Aaron pauses in the middle of smudging orange into the red stripe and groans, “Jesus, every time you look at me like that I just want…”

When I reach him, I smell him. Patchouli, black pepper, and vanilla. His signature shower gel. It’s faint at his ankles. His giggle when I lick his instep isn’t, though. It’s loud and it reverberates through me, making my eyes roll as I run my tongue up his shin bone, as I drag it through the rough hair and wrinkle my nose against the tickle.

As soon as I reach a patch of soft, smooth skin I start to suck. Aaron widens his legs and I see an opportunity. His cock is only half erect, but not for long. God, I can barely breathe. I’m about to do something that’ll make him purr and I know the sound will have me fucking the floorboards. I twist my neck, push my face into the hollow at the back of his knee, and bite.

A make-up brush bounces off my hand and rolls under the desk. I bite deeper, form a seal with my lips and suck so hard I know I’ll leave a lingering mark. But I won’t stop. I can’t stop, because Aaron’s heels are digging into my shoulder blades and he’s squirming so much his chair starts to roll over the floor.

I follow, still latched on, and as soon as the chair hits the bed I shift. Hands on Aaron’s soft thighs, pulling myself up, dipping my head to kiss and nibble my way over his skin. His goosebumps almost make me laugh, but my mirth fades when I catch another scent. The patchouli and pepper are stronger here, but there’s something else layered beneath them. It’s the scent of Aaron. Of his crotch. The natural fragrance that always clings to his pubic hair no matter how well he washes.

He’s supposed to be the big cat today, but I’m the one roaring. I’m the one losing my shit, lunging at his cock and taking it to the back of my tongue before I’m even ready. I gag. Splutter through my nose. Feel my eyes watering and don’t give a fuck about mascara tears because Aaron is already grabbing my hair and pumping his groin.

I love this. Love having his cock in my mouth. Its taste, its size, the feel of his foreskin moving beneath my tongue. The stretch of his over pronounced head pushing past the last barrier in my throat and sinking into my oesophagus makes my arse spasm.

Holding my head still, Aaron fucks my mouth. His balls slap of my chin. We’re not even on the bed and the springs are squeaking. I’m going to cry. Puke. Pass out. Come. Fuck, I’m so close to coming and my cock hasn’t even been touched.

Aaron must know. I don’t even realise he’s withdrawn until he’s on his knees in front of me, shuffling closer until our chests are touching. He grabs my cock and mashes it against his, shaking his wrist and wanking us both at the same time. I’d love to help, but I’m so overcome with desire it’s rendered me useless.

And this is what Aaron loves. Me, so fucking delirious with need for him that I become nothing more than thrusting hips, a ravenous mouth, and animalistic growls.

In a desperate bid to keep myself upright, I grab the edge of the desk. Aaron gasps, a sure sign that he’s about to blow, and my sack tightens in response. My balls ache so much I realise I’m afraid of this orgasm. How fucking intense is it going to be?

So intense I throw my head back and holler at God. Is that my spunk or Aaron’s splashing my Adam’s apple? Why do I want to get back on all fours so that he can fuck me? My head drops forward and I open my eyes. What the fuck? Aaron is laughing, and I immediately see why. A rogue pot must have rolled off the desk when I grabbed it and spilled its contents over our dicks. Mingled in with our sticky come is the cutest iridescent powder. 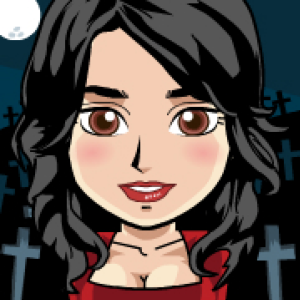 Thoughts, imaginings and opinions, straight from the slightly skewed mind of Ella Scandal