Men showed up one at a time to her suite, filling the room, and surrounding the bed where she sat. They were all different in appearance, but they were all there for one purpose. To indulge her gang-bang desires

Two men caught her eye, not because they’d already stripped off their shirts, though she appreciated the view. One was dark, his skin shiny like onyx in the light, his head bald and eyes sharp. The other was his opposite – fair skinned and freckled with white blonde hair and icy blue eyes. They snagged her attention because they stood side by side, arms crossed and muscles bulging, sporting impressive bulges. Their focus was on her even while everyone else clustered together, nervous jitters obvious. She smiled at them, already picturing herself sandwiched between them like ice cream.

She stretched out on the bed, letting her limbs spread to expose all parts of her. It served to draw more eyes to her, which made a warmth start in her belly.

“I appreciate you all coming and getting checked out so you could participate tonight.” Coming up to her knees, she slowly crawled to the end of the bed.

A gentleman with a round belly held out his hand for her as she rose up to stand.

“There aren’t any rules for this gang-bang. The only thing I ask is that you mind the time.”

Walking to the wet bar, she took a sip of her whisky, feeling the burn as it went down. Taking the timer, she set it. She downed the rest of her whisky, and turned back to the bed, shedding the dressing gown she’d donned to reveal her naked body. Hopping up on the bed, she leaned back and spread her legs. “Don’t be shy, gentlemen, we’re all here for a good time, aren’t we?”

The two men who’d been focused on her were the first to approach, nodding to each other and smiling. They seemed to communicate with each other without saying much because the onyx skinned pulling her up. He drew her close, kissing her hard on the lips until she was breathless. The blonde had taken the time to sit on the bed behind her. He grabbed her from behind, pulling her down into his lap, against a thick cock. She pushed up on her knees and shimmied until she could feel him spreading the lips of her cunt. Slowly, she sank down until she took him in completely, enjoying the feel of him stretching her wide. God, it had been too long since she’d had cock.

She reached for the cock in front of her, pumping him as she slowly rode the blonde. Leaning forward, she took the cock into her mouth. She groaned as he stretched her mouth.

That had her smiling around the cock in her mouth.

The other man just laughed and grabbed her head to push her down on his dick. “Not yet. We gotta fuck her together like we promised.”

“Then you better get going.”

Before she could bob back down, the cock in her mouth was gone. The blonde leaned back, lifting her hips so the cock in her cunt was gone too. Lube-slicked fingers pressed into her asshole. The biting stretch made her pant. Blondie held her still while the darker man pushed her legs apart. The fingers in her ass were quickly replaced by the head of a cock. One slide into her cunt while the other inched into her ass. She shuddered at the full feeling. But it wasn’t enough.

Turning her head to the side, she eyed the men jerking off near the bed. “Give me more cock. Now.”

A short guy with a long, thin cock climbed up on the bed bedside them and she leaned in to take him into her mouth. Her eyes slide closed as each hole was filled. A hand wrapped around her wrist, guiding her own around the base of another thin cock. Her other hand was quickly filled and she moaned around the cock in her mouth.

A persistent finger found her clit, massaging at it until she couldn’t control her cries. The man fucking her mouth fisted a hand in her hair to hold her still as he picked up her pace. She couldn’t help the trembling that started, heralding the end. It built with each hard thrust into her cunt or smooth exit from her ass.

She came with a stifled cry, her body erupting as the cock in her mouth slid deeper. She nearly chocked as he held her still, coming in a big wave down her throat. He went limp with a grunt, sliding from between her lips with a wet pop.

Drawing in a shaking breath, she glanced around the room. “More. Don’t stop.” 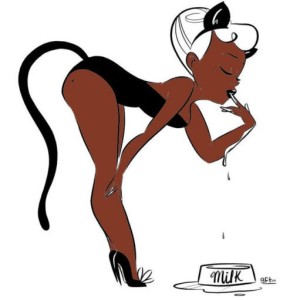