This post, about terminology used to talk about gender and trans folks, is part 2 in our introduction of some of the most common trans and non-binary gender identities both of them written for us by the fabulous blogger Quinn Rhodes. (ze/hir). If you missed part one then check that out too: Gender glossary 101: An intro to trans terminology

This is a brief introduction to some of the gender identities that trans and non-binary folks identify as.

A cisgender (or cis) person is someone whose gender identity matches the sex they were assigned at birth. So, if your doctor looked at your genitals as a baby, saw a vulva and said ‘it’s a girl!’ and you identity as a woman for your whole life, you are cisgender.

Cisgender is not a slur, it’s a descriptive word like ‘tall’ and you shouldn’t be offended if someone calls you cis. Some cis people insist that they aren’t cis, they’re just “normal” but this is hurts trans folks and suggests that cis is the ‘default’ – it’s not, and trans people have always and will always exist.

Often used interchangeably with non-binary, genderqueer is a non-binary identity that can also be used as an umbrella term for gender identities that fall outside the gender binary. Genderqueer can also be viewed as a gender in its own right.

Genderfluid people move around the gender spectrum and both feel and present different ways on different days. For example, one day a genderfluid person could feel very masculine and use he/him pronouns but they next day they feel more feminine and want to paint their nails to express their gender.

Two-spirit refers to a person who identifies as having both a masculine and a feminine spirit and is used by some Indigenous people to describe their sexual, gender, or spiritual identity. This is a good place to point out that all the language I’ve talked about here comes from an English-speaking, colonialized point of view. Many more genders were recognised – and still are – by indigenous folks before colonialization.

Transmasculine (or trans masc) folks were assigned female at birth but now present and identify as more masculine than feminine.

Transfeminine (or trans femme) folks were assigned male at birth but now present and identify as more feminine than masculine.

Bigender folks usually identifies with two distinct genders, such as a man and a woman or a woman and a queergender person. They don’t necessarily identify with each gender fifty percent of the time.

These are only a handful of the non-binary and trans identities that exist. There are also non-binary folks who identify as trigender, nongender, third gender, demi boy or demi girl – to name just a few!

A trans ally is typically a cis person who supports members of the trans and non-binary communities.

TERF stands for trans-exclusionary radical feminist – a name which is totally inaccurate because you cannot be a feminist if you don’t support trans people. They tend to believe that trans women are actually men; please don’t be a TERF.

The language used by trans and non-binary folks is constantly changing and evolving. None of the terminology I’ve defined here have only one interpretation: everyone can interpret and use these labels and concepts in the ways that work for them – or reject them entirely. As a cis person, you shouldn’t tell a trans or non-binary person that we’re using our language wrong just because it doesn’t fit with your understanding of that term. 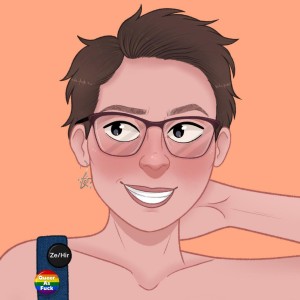